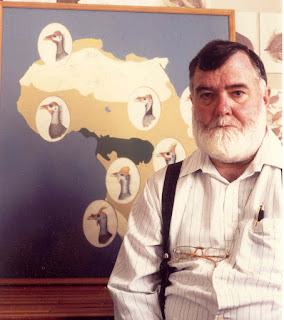 -  B.A. covered totally by various scholarships
-  M.Sc. covered totally by NDEA Title IV Fellowship
- Ph.D. covered totally by Overseas Students Scholarship and a grant from De Beers Consolidated Mines Ltd
-  Chapman Fellow - American Museum of Natural History 1981-82
(This research was also supported by a post-doctoral grant from the Council for
Scientific and Industrial Research (CSIR) and smaller grants from UCT [Bremner
Fund] and several American museums.)  Other Chapman Awards were granted in
1978, 1984, 1986 and 1994.
-  Ernst Mayr Fellowship - Harvard University 1986
-  Recipient of long-term grant support from the Core Programme of the Foundation
for Research Development (FRD) : 1985-2013
-  Leader of South Africa's sole FRD-funded Special Programme on Molecular
Systematics (1990-1994) (annual vote R40000); additional grant support for this
project from Southern African Nature Foundation (1991-1993) (annual vote
R38000)
-  Member and coordinator of South Africa's major FRD- and DEA-funded Special
Programme on Conservation Biology (1990-1994) (vote R300000 p.a.)
-  My research on avian biogeography and evolutionary biology has also been
supported in part by grants from UCT's Research,  Equipment and Bremner
Travel Committees and several U.S. and European museums.
-  Awarded special grant by FRD to educate resource economists 1994-96 (annual
vote R25000)
-  In 1995, I was awarded an ad hoc grant of R60000 by the FRD to maintain the
Fitztitute's M.Sc. Course in Conservation Biology of which I was the Co-
ordinator.
-  My and my students' research on prioritizing areas for biodiversity conservation
was supported for 1996 by the Danish Centre for Tropical Biodiversity (R18300).
-  My and my students' research on gamebird biology has been supported by a range
of investors from the public and private sectors (vote for 1997 R575500; 1998
R720000; 1999 R650000).
-  Since the early 1980s, my and my students' research has been supported by the
Foundation for Research Development (FRD), the National Research Foundation
(NRF) and the THRIP Initiative
-  In October 2001 I was notified that a major, three-year grant from the South
Africa/Sweden Bilateral Initiative (R380000) was approved
- Merit awards on 2000 and 2001 by the UCT Faculty of Science for "the meritorius
nature of your [my] teaching and your [my] community and outreach work"
Programme leader South African Department of Science & Technology
Centre of Excellence

Referees and areas of expertise:

Publication numbers marked with asterisks indicate co-authorship with a student who worked under my supervision or co-supervision.

Publications in scientific journals – those marked with * co-authored by students:

*Little, R.M. & T.M. Crowe.  1992.  The use of morphometrics and development of plumage in estimating the growth patterns and age of Greywing Francolin Francolinus africanus.  Ostrich 63: 172-179.

*Little, R.M. & T.M. Crowe.  1993.  The breeding biology of the Greywing Francolin Francolinus africanus and its implications for hunting and management.  South African Journal of Zoology 28: 6-12.

Crowe, T.M.  1993.  Promoting the preservation and utilization of African biodiversity: the University of Cape Town's programme in conservation biology.  Bulletin of the Southern African Institute of Ecologists and the Environmental Scientists 12: 20-24.

Crowe, T.M., W.R. Siegfried, A.T. Lombard & M.A. du Plessis.  1994.  Science and the development of strategies for the conservation of biodiversity in the 'new' South Africa.  Bulletin of the Southern African Institute of Ecologists and Environmental Scientists 13(1): 13-19.

Crowe, T.M.  1996. Developing a national strategy for the protection and sustainable use of South Africa's biodiversity. South African Journal of Science 92: 218-219.

*Jansen, R., R.M. Little & T.M. Crowe.  1999.  Implications of grazing and burning of grasslands on the sustainable use of francolins (Francolinus spp.) and on overall bird conservation in the highlands of Mpumalanga province, South Africa. Biodiversity & Conservation 8(5): 587-602.

*Ratcliffe, C.S. & T.M. Crowe.  2001.  The effects of agriculture and the availability of edge habitat of populations of Helmeted Guineafowl Numida meleagris and on associated bird assemblages in KwaZulu-Natal province, South Africa. Biodiversity & Conservation 10 (12):   2109-2127.

Crowe, T. 2011. What kind of fowl am I? Poultry in motion. Proceedings of the Congresses of the Southern African Society for Systematic Biology, Grahamstown 19-21st January 2011, hosted by the Department of Zoology and Entomology, Rhodes University.

*Crowe, A.A. & T.M. Crowe.  1984.  Variation in the breeding season of the White-fronted Sandplover in southern Africa.  Proceedings of the 5th Pan-African Ornithological Congress 787-798.

Crowe, T.M.  1992.  Morphometric research on Miocene and Pliocene fossil phasianids from the west coast of southern Africa: some preliminary taxonomic and phylogenetic conclusions. Proceedings of the 7th Pan-African Ornithological Congress 217-225.

Crowe, T.M., E.H. Harley & M. Jakutowicz  1992.  Phylogenetic relationships of southern African francolins (Francolinus spp.) as suggested by the structure of their mitochondrial DNA and their morphology, behaviour and ecology.  Proceedings of the 7th Pan-African Ornithological Congress  261-267.

Racialism is a nasty, but profitable, ‘business’

Khoisan origins: why ‘race’ has no place in human ancestry

Are academic freedom and non-racialism dead at the University of Cape Town UCT? – mixed messages
http://rationalstandard.com/academic-freedom-non-racialism-dead-university-cape-town-uct-mixed-messages/

The long struggle to understand species: from pre-Darwin to the present day
https://theconversation.com/the-long-struggle-to-understand-species-from-pre-darwin-to-the-present-day-65962
3546 reads

How science has been abused through the ages to promote racism

WHAT DOES THE UNIVERSITY OF CAPE TOWN (UCT) BLACK ACADEMIC CAUCUS STAND FOR AND WHAT HAS IT DELIVERED?
https://www.uct.ac.za/dailynews/?id=10044
http://www.biznews.com/leadership/2016/10/31/top-scientist-asks-black-academics-what-does-decolonised-uct-look-like/

The ‘failed’ debate at UCT
http://www.biznews.com/thought-leaders/2017/01/04/uct-implications-failed-debate-crowe/

When is a species really a species?  Even Darwin got it wrong.
https://theconversation.com/the-long-struggle-to-understand-species-from-pre-darwin-to-the-present-day-65962

Re-racialization and proto-Fascism at the University of Cape Town (UCT): a tale of four meetings

University of Cape Town: Where is the justice in this?  Clemency for lawbreaking students.
http://www.politicsweb.co.za/opinion/uct-where-is-the-justice

How can South African universities be “reborn”?

The University of Cape Town (UCT): Who’s running the show?

What are the real ideological differences between Fallists and scientists at the University of Cape Town (UCT)?

‘Decolonizing’ the University of Cape Town (UCT): means to an end or just the end?
http://www.biznews.com/thought-leaders/2017/01/11/decolonising-universities-tim-crowe/

Money makes the University of Cape Town go round

The ‘reborn’ University of Cape Town (UCT): a birth to be celebrated or a tragic abortion?

Frantz Fanon has a place in the history of Black Consciousness not in post-Apartheid South African politics
http://www.politicsweb.co.za/opinion/frantz-fanons-ideas-will-bring-us-only-ill

Professors should earn their status, not be “made”
http://www.uct.ac.za/dailynews/?id=9843

Echoes of “peace in our time” and Lord of the Flies
http://www.politicsweb.co.za/comment/uct-giving-appeasement-a-bad-name

Let’s ask the hard questions and rebuild UCT together

Cecil John Rhodes – warts and all

Crowe, T.M.  1985.  Birds in space and time: biogeographical and systematics research at the FitzPatrick Institute. Bokmakierie 37: 46-49.

Crowe, T.M.  1993. Promoting the preservation and utilization of African biodiversity: the University of Cape Town's Programme in Conservation Biology.  Bulletin of the Southern African Institute of Ecologists and Environmental Scientists 12: 20-24.

Zoology II – one week module on biogeography, including a practical on sland biography.

Systematics and Evolution (3rd year) -- two-week module on species concepts and speciation, one week module on congruence and combinability, one week module on biogeography.   2001 student assessment on overall teaching (approachability, ability, effectiveness, motivation  -- each scored 1-4):  176 out of a possible 192 marks (91%); two students felt that I could be considered for a distinguished teacher's award and one said that he/she felt that I was the "best teacher" he/she had experienced.

Ms Helen Prinsloo – Use of landscape and sustainable utilization of Helmeted Guineafowl in the Riemland of the Free State, South Africa Dec 2003.  Currently working in the USA for a hunting tour operation.

Ms Anna A. Crowe - Aspects of the behaviour and ecology of White-fronted Sandplovers and Sanderlings on a South African sandy beach.  Degree awarded June 1986.  I advised on statistical procedures only.  In 2012 she was awarded a Ph.D. in biological science education which has subsequently been awarded prizes by international educational societies.

Mr Deon Nel - The application of molecular systematic techniques to problems relevant to conservation biology.  Degree awarded June 1993. Went on to obtain a Ph.D. at UCT and is currently Head of Global Biodiversity – World Wide Fund for Nature International.

Ms Helen de Klerk - Priority areas for the efficient conservation of non-passerine avifaunal diversity in sub-Saharan Africa.  Degree awarded June 1994.  Continued to work with me towards her Ph.D.

Mr Potiphar Kaliba. -. Phylogeography of selected Malawian passerine birds.  Degree awarded 2006.  Went on to complete a Ph.D. under my co-supervision.

Distinguished scientists who visited South Africa on my invitation and, in general, were supported by funds raised by me.